The store will not work correctly in the case when cookies are disabled.

FREE SHIPPING ON ORDERS OF $75 OR MORE

SKLZ is proud to partner with the Challenged Athletes Foundation to provide adaptive sports equipment, training, and competition expense coverage for athletes with physical challenges to help them on their journey on and off the field. CAF supports athletes with physical disabilities across 103 different sports and activities. Meet some of the incredible athletes from around the world who are beneficiaries of CAF’s support.

At the end of Aaron Loy’s first quarter at UC Santa Barbara, he felt ill after spending a day surfing. Rushed to the hospital, he was diagnosed with bacterial meningitis and immediately put into a medically induced coma. To save his life, physicians had to amputate both of Aaron’s legs below-the-knee. Enduring nearly 13 surgeries and months of rehabilitation, Aaron began competing in adaptive sports about a year and a half later.

He started with sled hockey and wheelchair lacrosse, however, was drawn into sled hockey because of its physicality and fast pace. He plays competitively for the San Diego Ducks sled hockey team and was on the Sled Hockey Paralympic Development team for 2 seasons. His goal is to continue competing in sled hockey and adaptive surfing hoping to eventually participate in a surfing competition, as he surfs with his old high school and college friends. 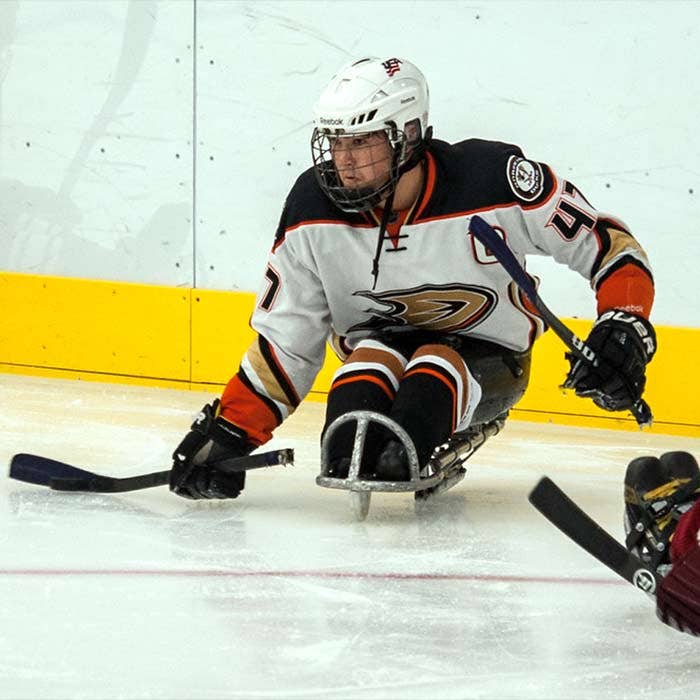 Darek Symonowicz is a single-leg amputee currently competing for Canada’s Sitting Volleyball team. Recently in 2019, he helped lead his team to winning a bronze medal at the Parapan Games in Lima, Peru. His current goal is to qualify for the 2020 Paralympic Games in Tokyo in Sitting Volleyball, to get there he has been determined to train sitting volleyball 3-6 days a week. Right before the COVID 19 pandemic, he was playing Wheelchair Basketball with the Canada National and Academy teams. He was able to win the D2 Championship in the NWBA. Following that, he played overseas wheelchair basketball for the Cologne 99ers and finished second in his division before the playoffs were cancelled due to the pandemic.

Hilton Langenhoven currently competes for the South African Paralympic Track and Field team. He was born with albinism, a congenital condition that is a lack of hair, skin, and eye pigmentation. Hilton is classified as a class 12 vision impaired athlete. Growing up, he faced a lot of discrimination and bullying because of his albinism. He was introduced to athletics when he was in boarding school, when he realized that he could run faster than his friends that played football.

Jessica Cronje was born with cerebral palsy, however her disability never got in the way of playing sports. Growing up, she tried all different sports from track and field to surfing. Her favorite was wheelchair basketball. She loves the physicality, unity, and togetherness of the sport.

Since 2015, she has been a member of the Australian Gliders and in her first year was named 2015 Athlete of the Year by South West Sydney Academy of Sports in Australia. Her goal is to eventually represent Australia on the National Wheelchair Basketball Team. The training that comes with that goal requires more than 30 hours a week in order to manage her cerebral palsy and training.

Ella was born with a club foot and shorter right leg, which her family made the decision to have amputated when she was 9 months old to give her the best opportunities to remain active. At a young age, she wrote a letter to Santa asking for a “friend like her” and was introduced to CAF.

Ella is extremely active and involved in many different sports, including cheer, track and field, surfing, archery, and wheelchair basketball. She plays wheelchair basketball with BORP (Bay Area Outreach & Recreation Program) and has been a mentor to new and up and coming players. She received her first running prosthetic as a grant from CAF and has participated in multiple CAF Adaptive Sports Clinics both in the Bay Area and in San Diego. Both Ella and her mom, Sue, can speak to the impact of adaptive sports and wheelchair basketball on Ella’s development into a young woman, as well as the importance of local adaptive sports groups. Ella’s dream is to compete in the 2024 Paralympics. She says that CAF changed her life by providing her with a community to lean on.

Xavier (Xavi) was born with Spina Bifida, but he never let that slow him down. From an early age, he has always wanted to be part of the action. He became part of Team CAF in kindergarten when he received an equipment grant for a WCMX Wheelchair! That wheelchair changed his life, helping him keep up with his siblings and friends in the skatepark and on the playground. Since then, Xavi has traveled to Southern California every summer to participate in WCMX and adaptive surf clinics. In January 2020, Xavi participated in the CAF High School Track and Field Program where he learned how to use a racing chair and throw a shot-put. Recently, since returning to school in person, he has been working on building his speed and endurance on the track and enjoys taking his racing chair to the local track when he gets the chance.